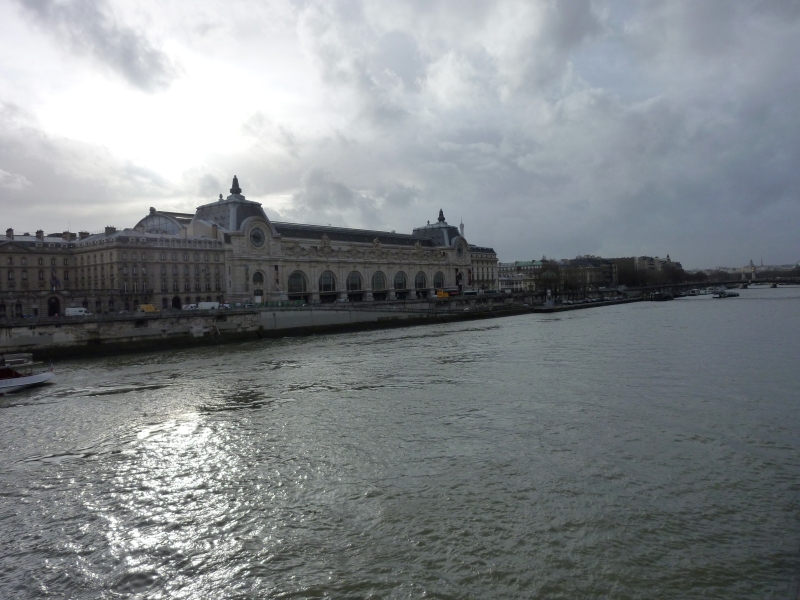 I’ve mentioned before that I do some work at a radio station. Yesterday I was preparing to pre-record a show and grabbed Iron & Wine’s album of rare-releases “Around the Well” from the station’s library (which, by the way, is a Mecca of music). I was scrolling through the tracks when I found this gem God Made the Automobile…. Psych! Can’t actually embed that track but I found a youtube video that I really enjoy that uses it. So check that out.

So… I need another song to embed. Iron & Wine often reminds me of Bon Iver. You get the same sort of mellowed vibe from the vocals of both Samuel Beam (aka Iron & Wine) and Justin Vernon (aka Bon Iver). The story of Bon Iver’s debut album “For Emma, Forever Ago” is that the majority of it was recorded in an isolated cabin in Wisconsin after the breakup of his band and his relationship. I realize that a photo along the Seine is a far cry from a remote cabin in the States, but you know, music reinterpretation/personalization and all that…. This pairing was a bit of a happy accident. The song is not my favourite Bon Iver track, though the whole album is solid, but it came on when I had randomly clicked this image on my iphoto. I liked the result; the photo and music are both serene and busy at the same time.

One last thing: I had embedded a song by The Wooden Birds in one of my first posts. The album was released yesterday so get on that. The next big album drop I’m looking forward to is… Bon Iver’s on June 21st! Not going to lie, I’m a little worried about this one. “For Emma, Forever Ago” was just such a great record and lately he’s been collaborating with Kanye West… I guess we’ll just have to wait and see if that’s a good or bad thing. So far all I know is that the track names are all cities and the song Calgary has already been released.